The emergence of #QAnon has been a long time coming and the roots of it’s crazed vigilantes, high on righteous propaganda, can be traced back to a visit to The Bohemian Grove by Prostitute of Mammon and snake oil salesman extraordinaire…..

For those who are perplexed by the emergence of QAnon, or faintly, or very much perturbed by the individuals who’ve turned up at destinations armed with assualt rifles and other weapons, ready to mete out justice vigilante style, an explanation is in order.

But here’s the thing, you are unlikely to get a full and balanced picture from reading the regular news media. But the understanding of what is happening and how we got here is urgently required. This mess won’t be cleared up by focusing on purely sensational aspects.

The emergence of #QAnon has been a long time coming and the roots of it’s crazed vigilantes, high on righteous propaganda, can be traced back to a visit to The Bohemian Grove by Prostitute of Mammon and snake oil salesman extraordinaire, Infowars Alex Jones, and the unassuming British journalist and author Jon Ronson.

Whilst most U.S. citizens have heard of Alex Jones, if you haven’t heard of Jon Ronson, I’d recommend any of his many wonderful books you can purchase on Amazon here.

On the 15th July 2000, Jones and Ronson sneaked into the shady world of the Bohemian Grove where they witnessed an owl ceremony which was no doubt bat shit crazy. The apex of the ceremony was the ritual sacrifice of what Jones told his radio audience was a child but which Ronson perceived as some sort of effigy, clearly was some sort of doll, but definitely not human or living.

One of Jones audience was so incensed by what he heard, he turned up himself at Bohemian Grove with weaponry intent on…..you’ve guessed it, meting out justice, vigilante style to right the wrongs of the Grove.

And so, the cookie-cutter template for vigilante style justice, stochastic terrorism stye was born.

You can watch Ronsons take on his visit to Bohemian Grove with Jones below, and stay tuned to rebelinfo.com for more knowledge on the road to #QAonon in the coming weeks….

When Ronson confronted Jones and asked him why he’d been saying what he had, as he knew that he had not really witnessed a human sacrifice, Jones’ response was allegedly, “Yeah, but I’m not going to tell my listeners that.” 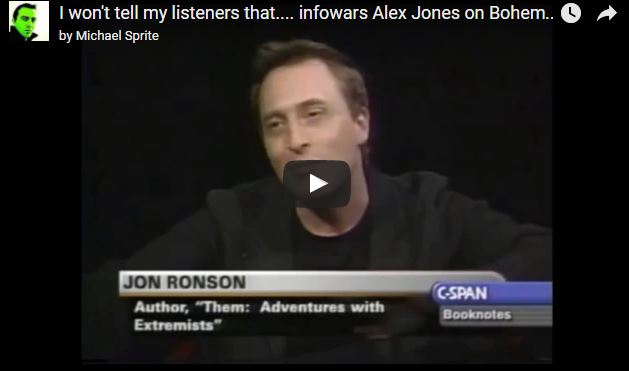 In the video above, British Journalist Jon Ronson recounts how he sneaked into Bohemian Grove with infowars’ Alex Jones to witness the ‘Cremation of Care’ ceremony.  At the climax, Ronson says that a papier mâché doll was thrown onto a fire.  Jones decided that it could have been a live baby.  Shortly after Jones went back on his radio show to tell his listeners what he had(‘nt) seen, an armed gunman showed up at Bohemian Grove wanting to shoot everyone as he’d been listening to the Alex Jones show and believed what he’d heard.  When Ronson confronted Jones and asked him why he’d been saying what he had, as he knew that he had not really witnessed a human sacrifice, Jones’ response was allegedly, “Yeah, but I’m not going to tell my listeners that.”

As many Alex Jones and infowars followers, ex-followers and car crash enthusiasts will know, the crux of the Jones doctrine is that the government are child-murdering Satanists who want to kill you (a difficult ruse to keep up now his man is the government…..then again…), your family, your friends and everyone else who is not part of the elite, before destroying what is left of the planet and blasting off to off-world colonies in Alpha-Centurai with the help of little green elves who they have contacted while under the influence of the drug DMT, which has also helped them achieve ten times the best orgasm they have ever had for three days straight.

If you are still unaware of Alex Jones and infowars, that may all sound a little crazy to you. You may be even more perturbed to learn that President Trump has been recycling Alex Jones’ talking points throughout his presidential campaign and again on into his White House and one of Trump’s closest allies and friends, Roger Stone worked closely with Jones and the alt-right in order to bypass the mainstream media and connect with the millions who have given up on, or were never interested in the mainstream press, and now get their ‘news’ from wildly partisan and inaccurate websites such as infowars and breitbart.

This is not to say that the mainstream media has got to where it is today by being an upholder of democratic values and speaking truth to and holding to account power.  If that were the case, infowars and breitbart would not exist in anything like the form they do today.  Time and again the press in both the U.S. and the U.K. has been found wanting on the major issues of the day, from the Kennedy assassination through to Waco and 9/11 in the U.S. and in the U.K. police brutality and collusion between the police, state and the press during the 1984-85 miners strike, the Hillsborough Stadium tragedy, 9/11 (again,) the financial crash of 2007, the run-up to the war in Iraq, Libya, Syria and all the stories we should have heard about but didn’t, our mainstream press have mainly abjectly failed in their job to fearlessly report the truth.

The Cracks That Let The Dark Shine Through

Where the cracks have opened in the truth, they have allowed extremists with unpleasant agendas to fill the gaps, reporting what has been missed by the msm whilst attaching their political goals to their reporting as the panacea for all ills afflicting our society.  Rather than examining the threat posed by upstarts such as Alex Jones (who, whatever you think of him, has been singularly driven and ultimately hugely successful in grooming a whole nation in political extremism) they have been dismissed as conspiracy theorists who don’t believe that Sandy Hook happened and that 9/11 was an inside job (any sane, rational person should still be bemused by the events of 9/11 but we don’t need to take on board the wilder flights of fancy about the events of that day to have the lingering suspicion that there are truths still to see the light of day that remain hidden.)

Whilst it is true that Alex Jones indulges in mindless and easily debunked conspiracy guff, it is also true that he covers many stories that are not always flattering to either power or the press in detail.  It just needs enough doubt inserted into a listeners or viewers mind and then maybe they can be coerced into believing wilder and wilder stories.

Had the press actually focused on how and why Jones collects his stories and laid it all out for folks to see, they may have had a better chance at stymieing the rise of Trump and the alt-right.  An educated and efficient investigative reporter follows the evidence to see where it leads.  Alex Jones already knows what the outcome of any investigation is, he just has to find the evidence to fit it, no matter how tenuous that evidence is.  As long as the evidence can somehow fit the narrative that the government is either trying to kill you, trying to poison you or trying to steal your kids to murder for, or during, satanic rituals, it goes in the mix.

This being the case, it is relatively easy to take apart almost any of Jones statements or reporting and show it up for the tissue of lies that it is.

You may be thinking that, well, Jones is just a kook and he surely doesn’t matter now that Trump has been elected?  What this attitude fails to address is that straight after the election, Trump’s friend Roger Stone (of whom more another time) singled out infowars as a ‘template for the future.’  We would also do well to heed the fact that it was Jones who first started calling the MSM ‘fake news’ (unfortunately, on many occasion he has been correct) before Trump was doing so.  Then, we see news outlets such as CNN, The BBC and The Guardian getting in a tizz over being denied entry to Presidential press briefings.

Here’s the thing guys, if you had been doing your job and analyzing what is going on, rather than living in ivory towers of received wisdom, you wouldn’t be shut out of press briefings and I wouldn’t be having to write this.  Do you really want Alex Jones and infowars to be the future of journalism in Trump’s America (you may not have a choice the way things are going!?)

Finding out what is really going on is a dirty job, but someone’s got to do it.

Who is going to get there first, I wonder?

This is a text widget. The Text Widget allows you to add text or HTML to your sidebar. You can use a text widget to display text, links, images, HTML, or a combination of these. Edit them in the Widget section of the Customizer.
Loading Comments...
%d bloggers like this: